Glastonbury: A busman’s holiday – what I’ve learnt from volunteering 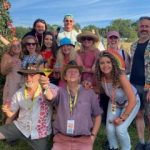 Nearly every year, I give up a chunk of my holiday and volunteer at the greatest show on earth – Glastonbury Festival of Contemporary Performing Arts.

Why? There are several reasons: not least the music (I went to my first festival when I was 14!) and my reluctance to accept that I am in my mid-50’s. Another good reason is being part of something unique – and, this is also why I became a Practice Manager.

Being part of a team

I have learnt over the years that playing team sports that being part of a high-functioning team is hugely rewarding. I was never a superstar but I was part of some very successful teams where my contribution was just as important. A team needs all of its components to function well. And a vet practice is the same: take away the receptionist, the nurse, the cleaner or the vet and the practice automatically becomes less efficient. Working together they can achieve astonishing results. So, working in practice and volunteering at Glastonbury both enable me to work with motivated talented committed people. Remember to value your team!

Be part of something bigger than yourself

By volunteering at Glastonbury, I also raise money for my chosen charity, the ARC, which supports homeless people in the Taunton area. If I can supply people, who undertake to work between them 288 hours over the five days of the festival, the organisers will donate nearly £3,000 to ARC.

Volunteering is important to me and I have tried to make it more central to my life over the last 10 years. It gives me two things:

Over the years, I have made a circle of friends from the festival.  They have become an alternative family. We see each other just once a year in a field in Somerset, with little or no contact for the remaining 48 weeks of the year. They are amazing: they are the least judgmental, most accepting, people I have ever met. They work ridiculously hard under very difficult conditions. And, because they have such a different perspective on life, they make me reconsider my opinions and actions. We range in age between 25 and 65 and bring varied skills and life experiences. One is an air traffic controller, another is an NHS occupational therapist, another is a cheese maker.  How varied can you get?

In work or in life, don’t choose people around you who think like you – diversity is healthy and brings new perspectives.

Getting the job done

Like many Practice Managers, I am only happy at work when I am solving problems with no budget or resources and limited time! My role at the festival puts me in that position daily. In many ways, it’s a busman’s holiday!   I have two roles at Glastonbury – a volunteer steward supervisor and also team leader for the Tipi Village Team of people. As one of 12 supervisors, I am responsible for the care of the 300 volunteers and must ensure we have sufficient people on each shift to fulfil our obligations to the festival.

There are other responsibilities, including participating in meetings to run through disaster management scenarios and plans.  During the last five years, we’ve planned for a terrorist threat; an infectious viral outbreak and catastrophic weather events. Anything that could be considered a disaster, the chances are we have considered it and have a plan in place. It’s not a bad idea for every practice to reassess their own disaster preparedness plan annually.

Taking tough decisions and owning them

My role requires me to take tough decisions and take responsibility for them. On two occasions, I have had to shut a venue down as I was concerned for safety.  I felt I had to take steps to mitigate the risk but these were not popular decisions with a crowd of about 3,000 people intent on having fun. But disaster was averted: the concert continued after a short break and the party lasted till 6.00 am!

Overall, volunteering at Glastonbury gives me a lot to think about and I have some sleepless nights before and during the festival. But my professional life has helped me in my voluntary work – and vice versa – in three key ways:

Of course, there are perks to volunteering at the festival. I have met famous people, I get unlimited tea/coffee on site, free WIFI, and I get to watch some of the world’s best musicians from a very privileged position – plus, I get a hot shower every day. Never underestimate the benefits of feeling clean when you have been in a tent for a week!

This year’s festival closed on June 27th. I had my 56th birthday the following day and then promptly had a stroke! Two months later, I am still recovering – 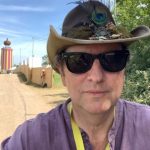 albeit, a lot more slowly than I would like. My biggest challenge is managing myself. I thought I would be fighting fit by now, but I am not. Simple tasks leave me absolutely shattered and needing a rest. In September, I will start working from home on a limited basis– 4 or 5 hours a day, 5 days a week – to see how I cope. My biggest battle right now is with myself: I’m coming to terms with the fact that I am having to re-train my brain to do things that were once second nature – and giving myself time to heal. ~ Stuart